A lucky local man from Sittingbourne has been surprised with a brand new car after he won a radio competition with Heart FM Kent.

Robert (pictured) was handed the keys to a brand new Volkswagen Take up! courtesy of The JCB Group, at JCB Medway in Gillingham. During the summer he had taken part in the radio station's 'Make Some Noise' campaign which aims to help small, local childrens' charities to have a voice. Listeners were asked to donate money towards the charity by texting in, which automatically entered them into a grand prize draw.

The radio station, owned by Global, had partnered with us to provide the car for the text competition which ran from August to October. It raised a whopping £21,000 for Global’s 'Make Some Noise' charity. Thanks to all those who donated, it's an amazing achievement.

Robert, who recently got a new part-time job, was thrilled to learn that he had a new set of wheels for his new commute. He said: “You don’t even think about winning the car. It was all about the donation." He added: “It’s the first time I’ve ever owned a new car. Fantastic!”

JCB Group Managing Director, Jonathan Bischoff, met Robert and Heart presenter Jonny Meah at the showroom and handed over the keys to the brand new car. Robert was obviously thrilled and delighted with his new car and we wish him many years of happy motoring. 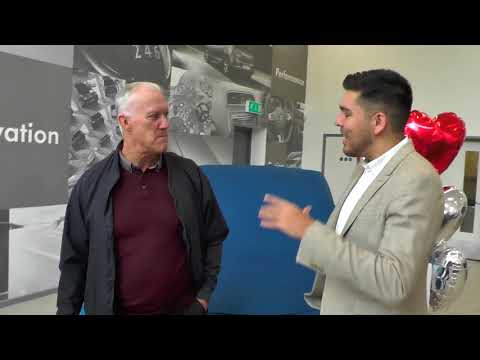 We subscribe to the Motor Industry Code of Practice. Motor Ombudsman Ltd acts as arbitrator in any unresolved consumer disputes. Motor Ombudsman Ltd is a Chartered Trading Standards Institute Approved (CTSI) Alternative Dispute Resolution Provider. www.themotorombudsman.org.
Back
Book A Service
Vehicle Valuation
Compare Saved Vehicles
Top
Close
Your Cookie Settings
Select your cookie settings
Strictly Necessary Strictly Necessary cookies are essential to let you move around the website and use its features, such as accessing secure areas, shopping baskets and online billing. These cookies allow our website to provide services at your request.
Performance Performance cookies collect information about how you use our website e.g. which pages you visit most often, and if you experience any error messages. They also allow us to update our website to improve performance and tailor it to your preferences. These cookies do not collect any information that could identify you - all the information collected is anonymous. They will not be used to target adverts to you on other websites.
Functional Functionality cookies are used to remember the choices you make, e.g. your user name, log in details and language preferences. They also remember any customisations you make to the website to give you enhanced, more personal features.
Targeting Targeting cookies collect information about your browsing habits to deliver adverts which are more relevant to you and your interests. They also measure the effectiveness of advertising campaigns.
Save Settings
Cancel Changes