Test Drive Offer - Get £500 Off The Entire SEAT Range*
Find Out More
We have offers across the range and we are here to help find the best offer for you. We can also tailor a finance solution for you and also organise your part exchange. Please contact us for more information on our great range of offers. Send an Enquiry
Specification The new Ateca Specification Build and configure your ATECA now. Configure My ATECA

Ateca SUV at JCB Euro SEAT in Crawley and Ashford

Winner of the 2019 Best Small SUV What Car? Award

Already winning awards it's not only good looking but with the very latest in technology and power. The ATECA is taking the SUV sector by storm!

Packed with outstanding features and innovative technologies, Auto Express have awarded it 'Best Crossover' in their new car awards for 2016. With plenty of space for passengers and luggage, outstanding safety and technology features, an excellent drive, punchy performance, great fuel economy and competitive pricing,it's gained a 5 star rating:

"The Ateca follows in the footsteps of the Leon, and goes straight to the top of its class. Its combination of practicality, performance, running

costs and kit is hard to beat". (Auto Express road test verdict). Watch their video below...... 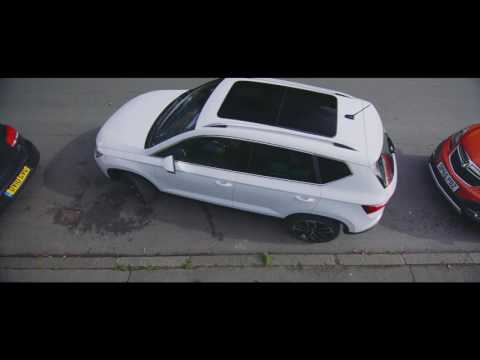 Honest John's Car of the Year 2017:
“Over the past 12 months, no other car has come close to matching the admiration of the Ateca, with our readers praising its style, comfort and running costs. As a result, the superb SEAT takes both the car of the year and most-popular crossover awards for 2017.”

One year on from claiming its first major UK award, the Ateca’s winning ways show no sign of slowing after it drove away with the accolade of Car Dealer magazine’s Car of the Year.

Success in the Car Dealer Power Awards adds another dimension to the Ateca’s all-round appeal, as it is based entirely on the opinions of the people working in Britain’s car dealerships, across all brand franchises.

James Baggott, Car Dealer’s editor, pointed out that SEAT’s first SUV clinched the title thanks to a healthy haul of votes from dealers representing rival manufacturers.

He said: “The Ateca has a combination of distinctive design, driving fun, urban versatility and compelling utility. .. In double-quick time the Ateca has established itself as a firm favourite among the motoring media, UK car buyers and, of course, dealers who represent the brand.”

Accepting the award, Richard Harrison, SEAT UK Director, said: “We knew the Ateca had great potential to succeed, and the impact it has had in the UK has surpassed even our own ambitious aspirations.

Can't wait to drive one and see for yourself? - book a test drive now!

Call us to find out more at

Free & Fast Online Part Exchange Valuations Interested in selling or part-exchanging? Use our tool to find out what your vehicle is worth. Value Now

We subscribe to the Motor Industry Code of Practice. Motor Ombudsman Ltd acts as arbitrator in any unresolved consumer disputes. Motor Ombudsman Ltd is a Chartered Trading Standards Institute Approved (CTSI) Alternative Dispute Resolution Provider. www.themotorombudsman.org.
Back
Book A Service
Vehicle Valuation
Compare Saved Vehicles
Top
Close
Your Cookie Settings
Select your cookie settings
Strictly Necessary Strictly Necessary cookies are essential to let you move around the website and use its features, such as accessing secure areas, shopping baskets and online billing. These cookies allow our website to provide services at your request.
Functional Functionality cookies are used to remember the choices you make, e.g. your user name, log in details and language preferences. They also remember any customisations you make to the website to give you enhanced, more personal features.
Targeting Targeting cookies collect information about your browsing habits to deliver adverts which are more relevant to you and your interests. They also measure the effectiveness of advertising campaigns.
Save Settings
Cancel Changes